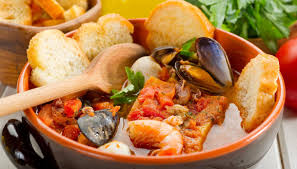 Livorno is a city 20 km from Pisa known for its touristic and commercial harbor.

The famous cruises stop in Livorno during Summer and every day modern ferries are leaving the city towards Sardinia or Corsica islands.

Livorno is a pearl on the Mediterranean sea.

It is not so famous as Pisa, but still an interesting place to explore to know some aspects of Italian culture.

It is a city based on the culture of sailors included their old but tasty recipes.

It is called Cucina Povera because is based on a mix of simple ingredients.

The Cacciucco is one of them .

There are many restaurants in Livorno, especially in the city center or near the harbor where you can find this incredible recipe

800 g of fish with bones (as tub gurnard and scorpionfish)

About 2 kg of squid and octopus

Salt and pepper to taste

Livorno is really a perfect place for a city break

Thanks for reading and subscribing to my youtube channel and blog